The Need for Camber

With every heavy structure comes the need of cambering beams for strength and aesthetic purposes. A cambered (curved) beam can support a greater weight, lessening the impact of heavy loads on certain parts of the structure.

When it comes time to pour concrete on a floor, if beams are not cambered (curved), the floor will permanently sag under the weight. A sagging floor can result in cracking in the bottom of the concrete. When a beam is cambered before adding the concrete, the weight will still sag the floor, but will sag to the point of the floor being leveled.

The amount of camber is calculated from a variety of variables such as beam length and weight being supported. Refer to this image for examples of how camber should be properly used. 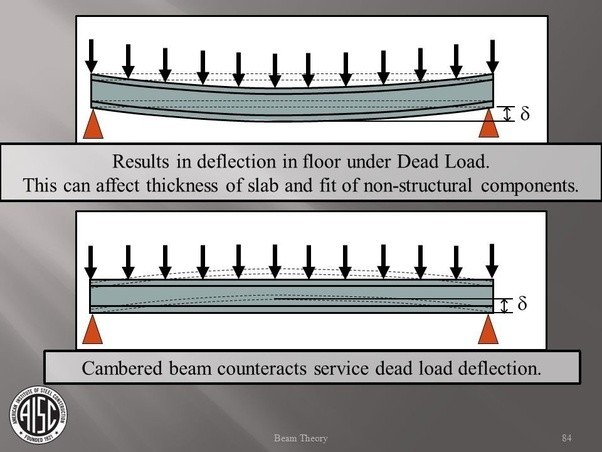 There are two primary methods for cambering: hot bending and cold bending.

Hot bending consists of applying heat to a beam that is wedged up at certain positions. When heated, the beam will bend under the weight. Cold bending involves using a cambering machine to put a camber in the machine by force. With two pivot points placed usually about 20 feet apart, two centered hydraulic cylinders force the center of the beam out until the desired camber is achieved.

When hot bending is used, it is often very time-consuming, labour intensive and difficult to do accurately. The operator doesn’t know where the camber will end up until the steel is cooled and fully contracted. If the camber was unsuccessful, the entire process of heating has to be redone. If the camber was too much, it also creates a problem trying to reverse the camber.

With a much less labour intensive process, the entire process of cambering a beam can be done in a matter of minutes, rather than hours. Any amount of labour and material savings will increase your bottom line. By adding a cambering unit to your operation and production line, your savings are compounded. Take for example a bundle of W24 beams X 30 feet long with a required camber of 50mm.

With the Bay-Lynx cambering machine, one operator could process 40 of these beams in 4 hours, while with the heat method it will be as much as 24 hours plus consumables.

To see a cambering machine in action, watch this video: